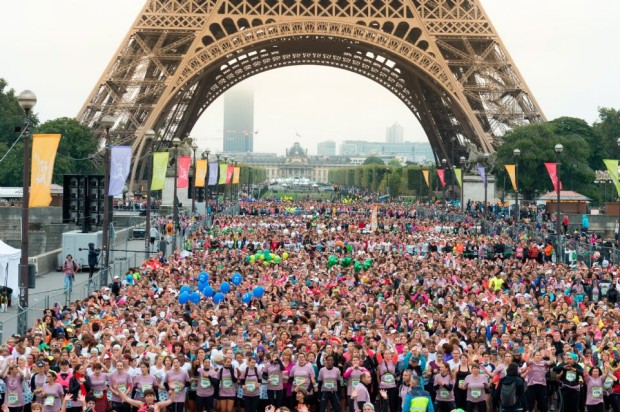 If you had asked me even three months ago whether I was a runner, the answer would have been an emphatic no.  I didn’t like running and I was sure I simply couldn’t do it.  Yet somehow this past Sunday saw me running the 6.7km La Parisienne race in Paris with 40,000 other women and loving the experience.  And when I say running, I mean 53 minutes of uninterrupted running – no stopping, no walking.

My worst school memories involve being sent on what was called in those days in the UK a ‘cross-country run’.  This seemed to be an excuse to make the class run so that no teaching was required and it was awful.  I made an occasional attempt as an adult to try and run, but of course, with no guidance, I tried to go too far and too fast and it ended each time in predictable frustration and failure.

So at the end of June, when an old school friend mentioned  that a couple of months after the birth of her son she was really enjoying running thanks to the Couch to 5 K (C25K) programme, I just had to look into it.  It seemed so simple.  The app would have me out three times a week and would involve manageable intervals of walking and running.  After nine weeks, I would be able to run continuously for 5km.  This was possible.  It could mean the end of every ridiculous diet I had ever tried and of every wasted gym fee.

I dug out an old pair of shorts and a t-shirt, an ancient sports bra (a relic from one of my many lapsed gym efforts) and what I think are own-brand Marks and Spencer trainers circa 2003.  The scruffy clothes were important.  This was not to be another of my whims and wild schemes to lose weight.  No expensive kit.  No fees. Just me running.  When I had completed the 27 work-outs of the C25K programme, then I would allow myself the fancy running gear. Not before.

I set out in my fetching outfit and walked over the Pont Sully. The woman’s voice on the C25K app then told me when to start jogging and then when to go back to walking.  It was tough.  But the programme is so well-designed that each running interval stops just before you have truly had enough.  You are left feeling that maybe you could even have managed a tiny bit more.  That is the trick – it reverses every feeling you ever may have had about diets and exercise regimes being doomed to failure or unsustainable.  C25K leaves you feeling that next time you work-out you might indeed manage a bit more.  The views of Notre Dame, the early morning glistening of the Seine and the sense of privilege of experiencing Paris hours before most Parisians would be out and about – all of this helped to ease my way.

A cocktail with two good friends sealed the deal.  I told them about the C25K app and that I would be sticking to it all summer and that I would be registering to run in La Parisienne in September.  I had said it out loud, semi-publicly.  I needed to stick to it.  And this time, unlike the various diets and gym memberships that have preceded this, I really wanted to do this.

And so it began.  Me, my M&S trainers and those cotton shorts made their way around Paris.  My parents were astonished that I was up and running each morning on the Pembrokeshire lanes on our UK holiday with them.  My old university friends were supportive and encouraging when I did the same in the Vendee during our annual reunion.  I did indeed complete the C25K programme over the summer and proudly came back to Paris and bought my real running shoes and clothing.  I had officially become a runner.

On Sunday 13 September I ran with 40,000 other women through Paris.  The atmosphere was joyful.  A very French build-up, with organised warm-ups to music, laughter and cheers among the women who were all ages, backgrounds, shapes and sizes.  We were there to have fun and to show the city a mass of women enjoying their sport.  I admired the women who speeded past me.  I admired those who walked.  I felt great pride in myself for running the course continuously and for having come so far in the weeks since I huffed and puffed my way past Notre Dame.  It was a wonderful moment for me.

What next?  I really believe I will run for the rest of my life.  This started out as being about weight loss (and my running continues to deliver weight loss) but it has become about so much more.  It was amazing to me how quickly my attention stopped being drawn first to the ‘calories burned’ stats on my iPhone after each work out.  Instead I want to know how far I ran and how fast.  I am intrigued by how far will I eventually be able to run.  I dwell less on what my body looks like and I am thinking more about what it might be able to DO.  I feel stronger and more confident about what it can do already.  6.7km I tell you!

My relationship with my six year old daughter has evolved since I took up running.  She is gaining something from seeing her mother get up and go out into the dark to run most mornings.  She wants to know how far I plan to run and how fast I can do it in.  She sees me set goals and achieve them.  She sees me prioritise my health and fitness.  She positively beamed when I brought home my La Parisienne medal for her.  My running is shaping her views of what I am capable of and what women are capable of.  And of course she wants a running outfit.

I have found a fantastic online community of (mostly UK) mothers who run.  Its called Run Mummy Run (RMR).  14,000 women post on the RMR Facebook page about the challenges and highs of being a Mummy who runs.  They love running so much they squeeze time into their busy days to do it, many of them pushing jogging strollers as they go.  They share their injuries and personal best times and they meet up at races.  On the days I am struggling to get out on run, a quick scroll through their stories gets me out and moving.

I have just signed up to go to London to run the Winter 10k on 31 January.  And after that, I will take on the Paris Half Marathon on 6 March.  13.1 miles sounds a horribly long way right now. But so did 5km just three months ago.  After the summer I have had, it all seems possible.